Maybe it was the overcast backdrop, or that my sidekick was absent, or maybe Italy has spoiled me but I left Lugano disappointed. It is a wet footprint of Italy on a French trail in a German forest. Certainly, I was not expecting a mind-blowing foreign experience by crossing the border an hour from Milan, but I was begging for some authenticity. Angular, reproduced, disparate and lacking cornerly warmth…but über clean. This is my Lugano experience. Oh, it was hardly an afternoon.

I’m weak sauce. After two hours of galavanting and meandering side streets in search of that hip-niche locale for lunch I gave up. Beneath a green pin-stripped awning plastered with Heineken logos, there I sat with my undersized beer and overpriced burger. With a bus stop to my right and a table of red-cheeked bulging Germans to my left I inhaled my meal only to get closer to a cigarette. I couldn’t wait to smoke. I devoured lunch in a record breaking 7 minutes and lit up. Provoking the rush was what seemed to be the Titanic reunion between some naval travelers across the way. Boisterous and disoriented they united in two groups as though decades had passed between their last meeting. Bear hugs, face slobbers, and ass pats.

My server asked me for the sixth time if wanted their 6-franc coffee. I refused for the sixth time. I took my sweet time, polished my plate, dried the beer, filled the ashtray and noted the Germans once more before plotting my next 4 hours until departure. Is Slovenia the only country left in the EU that sells Skittles? The instant happy pills were nowhere insight.

It began to rain. My sandals were inappropriate for the long haul across the lake to visit Ticino. So I passed another hour at the bar opposite the Heineken place before strolling down to the Museum of Modern Art once the rain paused. The MAN RAY exhibit was on display, (which I will be covering in a review next week), and it was a collection of Man Ray’s experiments during the Dadist period between New York and Paris. Man Ray was a common artist and friend among the Greats of the early-mid 1900s – Duchamp, Miró, Giocametti, Matisse, to name a few. His close friendship with Duchamp led to extensive collaboration and photographic experimentation. Some of the most noteworthy pieces displayed from the years of various projects were the candid photographs and portraits he had taken of Matisse, Picasso, and Duchamp among others of which Ray Man toyed with lighting and lens manipulation. Apart from grand documentation and the erotic vaudeville allure of the era captured within it, the museum mounted the works and displayed the exhibition well. Though the lighting was poor, and some of the security guards creepy, it was a pleasant and relevant experience for exploring the period.

Also in Lugano? Window displays left  much to be desired, and apart from a few floating Breitlings and Audemars Piguets in an archway or the swiss army knife atop a park bench, the cobbles were monotonous and bar music ranged from Phil Collins to Aerosmith. Yeah. So I decided after the Museum and a floral trip through the civic park that it finally came time for happy hour. I was itching to plan my next trip already and start my review on the Man Ray exhibition. Beer would tick time.

My train would depart nearly 2 hours from this point. I asked a local hairdresser where to get solid beer and comfortable seating to kill a happy hour. He kindly escorted me to his local fave, a wannabe dive with middle-aged preppies and a stroller or two. I ordered a long island, paced myself with the peanuts and started to compose my Man Ray review. Before long I was headed towards the train, ticket in hand, umbrella weakening by the drop, and departing in now 20 minutes.

The train would be late 10mins. Ten minutes was just enough time to run across the track to the restroom…and return to find my train accelerating to departure. So I spent the next 90 minutes in the station bar interviewing the Sicilian bartender and Norwegian server, later joined by the Napoletano owner. Three-comped beers later and 5 pages of story about the founding and comrades of the Lugano Station Caffe & Restaurant, I was boarding my train back to Milano. 11pm.

On the train back to Milano, a row of German-speaking Swiss girls in their late twenties were flushed with 5 bottles of wine and packaged prosciutto, a hand radio and suitcases full of energy to celebrate a recent engagement. The train inspector came around but only to indulge in his second round of Shiraz and voluntarily offer me one. Without checking my expired (missed train) ticket. I downed the wine, spoke about America with the Swiss, and learned about their friendships and their love for jokes of Italian men over the hour return home. 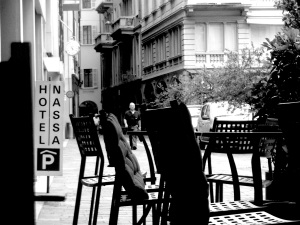