Marcello Geppetti was part of an elite group of photographers during the Italian Hollywood era of the 50s and 60s known as La Dolce Vita – The film by Federico Fellini which introduces the term “paparazzi” marks a period of some of the most important photography for Italian culture of this time. During this period Geppetti captured cinema’s brightest stars in rare form, candid and unexploited. Along Via Veneto to Villa Borghese and every side street in between – on set, carpooling, shopping, strolling, partying.

From Liz Taylor to Audrey Hepburn, Anita Ekberg to Felini himself the list goes on while Geppetti’s work (the kiss between Elizabeth Taylor and Richard Burton and Anita Ekberg shooting arrows at the photographers) has become considered among the thirty most famous photos next to those of Andy Warhol and Cecil Beaton.

The Dolce Vita Gallery not only features the Roman photographer’s private collection of hundreds of photos and negatives but has further launched the project in effort to expand the cultural awareness of this unforgettable past time. Visit the gallery in Rome, or tune in to the exhibition expanding around Europe http://www.dolcevita-gallery.com 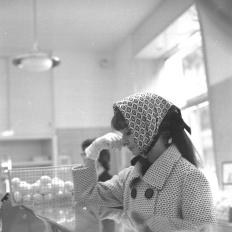